Stuck in all day with nothing to do? Spent too much time in front of the TV and want to do something different? Want a challenge or just something easy to do to take your mind off things? You need a solo board game.

You might think that there wouldn’t be any decent games out there for just one person but don’t worry. We’ve done the research and there are tons of good options. I personally love the strategic board games that are super challenging and hard to win. If I’m winning a game I want to earn it!

There are solo card games you can play, board games that are built for one person only or multiplayer board games that have a 1-player mode too. Whatever your preference, all these games come highly recommended so why not give them a go, you might even surprise yourself with which one you like most!

Reviews of The 6 Best Solo Board Games

Scythe is set in an alternate 1920s reality, Europa, where previously heavily armored mechs have closed their borders. Your aim is to conquer new territory, collect resources and coins, gain villagers and start up terrifying mechs.

Usually, each player would pick one character who represents one of the five factions. They have their own skillset, resources to start with and hidden objective cards. When you’re playing solo, you play against Automa.

From what people are saying it’s super challenging but very fun. You have to really concentrate and figure out how to outwit Automa to place your 6th star first. Each game is different and challenging in its own way because, even if you get used to the cards and what could come up, you never know which card will be drawn and what Automa will do next!

has a more detailed overview of the game if you’re thinking Scythe could be just the thing to get you through this self-isolation!

Mansions of Madness brought out their second edition which allows for an even better solo play. It’s app-driven, which allows you to be guided through the horrors that lie within the mansion. The app acts as the keeper, handling the monsters and scenarios so all the players can work together without the need for a keeper.

To start you only lay out a couple of tiles and then when new rooms are discovered you add more tiles as you go. This exploration makes it way more fun than the first edition and it makes it more interesting to replay because the board will end up different every time.

This game is a race to solve the mystery of that game and each player has special skills and tools to bring to the table. After you’ve had your turn, there’s a Mythos phase which is where you’ll be tested to the max by monsters as well as having plot points revealed.

All in all, it’s a really interesting game with high re-playability and even avid board game players praise this as one of the best games of its time. 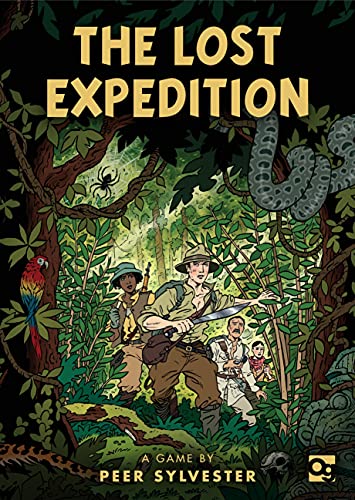 If you’re looking for a solo game that won’t take up loads of space and lots of set up time, The Lost Expedition could be right up your alley. It’s a card game where your character, explorer Percy Fawcett, delves deep into the Amazon to look for El Dorado. Unfortunately, he’s nowhere to be found and now you and your team just have one objective; get out of there alive!

Avoid or overcome the pitfalls that are put in place and choose your path through the Amazon carefully, it’s a matter of life and death after all. Your fate is in the hands of the cards and if the order comes up right, you can escape a harsh fate but if the odds are stacked against you it’s near impossible to win.

Having your fate in the hand of the cards makes for good replayability because you’ll never have the same expedition twice but it can seem almost cruel sometimes when it seems like you have no shot at winning.

If you’re a true board game fanatic then Mage Knight should be very high on your list of next games to get. It can be daunting for newbies (there’s 196 tokens and 240 cards, just so you get an idea of the magnitude of this game).

Once you’re through the rulebook and have a couple of plays though, you’ll get the hang of it. You’re a Mage Knight and basically you want to destroy everything in your path. The aim is to conquer areas of the board and powerful cities by collecting spells and actions, building your army and exploring the different terrains in the kingdom.

It’s a complex game, to say the least but it’ll keep you entertained for hours and the replay power is exceptional considering how many different components there are, you never know what the next game will be like!

This is a simple game but a much-loved one. It’s a deck-building game where you play as Friday and you’re trying to help Robert Crusoe escape a deserted island. There are a lot of hazards and 2 pirate ships that stand in your way.

The rules are easy to grasp. You work through the deck trying to defeat the hazards thrown at you with the fight cards in your hand. If you successfully defeat the hazard, you get to add that card to your fight pack. It’s not as easy as it sounds though.

You must work through the hazard pack three times, each time getting more and more difficult and then there’s the added component of the aging cards. The three really bad aging cards are at the bottom so just when the game is getting to its peak of difficulty, more will be thrown your way. Hey, nobody said it was easy to escape an island! There are even cannibals there!

Once you get through all the hazards, you’re ready to fight the pirate ships with the fight cards you’ve collected. Good luck islander!

If you love the classic Dungeons & Dragons board game but want to be able to play when you haven’t got all of your mates over, then this solo card version is an awesome alternative. You delve in and have to work your way through three levels battling various foes and perils.

It’s very challenging and difficult to win, so if you like a more difficult solo game then this would be a good bet. You have to build up your character from scratch and work through the dungeon layers battling different obstacles.

One of the cool things about this is, if you win the challenge, you get to choose either a skill, item or experience to take forward with you. Even if you don’t win you still get to keep the extras, but just don’t lose all your health points because then it’s game over.

If you make it deeper into the dungeon, the difficulty will keep ramping up until you make it to the end where you’ll have to try and defeat a boss. Because you’re shuffling the cards and changing players no two games will be the same. For a more in-depth look at the rules check out the official One Deck Dungeon rulebook

This is a cool solo game and can also be played cooperatively with a friend.

And there we have six awesome solo board games for you to try. Whether you want a purely solo game or a fun and challenging solo game that can also be played with friends if you so wish, there’s a little something for everyone here.