[toc heading_levels=”1,2,3″]If you think playing board games is just for kids, then you’re sorely mistaken. Board games can be so fun for children, families and adults alike and if you think they’re not then you’re probably playing the wrong games.

I was always into video games even after I grew up but I didn’t get into playing board games until I met a good friend and she introduced me to just how fun they can be. However, we found that most board games, even when they say 2+ players are better suited to more so we had to go on the hunt for some games that were just as fun and playable with just the two of us!

We’ve come up with a pretty impressive list and yes, being humble is definitely not one of my strong suits, but once you’ve tried out some of these games you’ll be agreeing with me too.

Reviews of The Best 2 Player Board Games

So, in the world of Pandemic, four virulent diseases have erupted in highly populated cities across the world. There are a range of roles and each player will assume one role during play; a scientist, medic, researcher, dispatcher, operations expert, quarantine expert, and a contingency planner.

This is a cooperative game so you’re all working together to save humanity and rid the world of these diseases but make sure you can work together as a team because if one of you loses, you all lose. The rules are fairly simple, so it shouldn’t take long to get the hang of it.

The game begins at headquarters and nine major cities already have cases of the diseases. During your turn you use action cards to try and contain the problem, research cures, treat the sick and eradicate the disease in hotspots. Unfortunately for you guys, every time you have a turn more cases turn up in other cities and if there are too many cases in one place it can lead to an epidemic. Once you’ve eradicated all of the diseases from all the cities across the world, you win the game, easy-peasy right?

One of the great things about this game is it can be played just as well with only 2 players (maybe even better because you’re not trying to hear the advice of 4 people all at once). You can also choose how difficult the game will be and it can get really challenging! No-one wants a game that’s super easy to win and this is not that. One reviewer says he only won 15% of the games he played!

Codenames Duet is the adapted version of the ever-popular Codenames game brought out in 2015. The original version required two teams to work together against the other team, however, they’ve adapted it into a cooperative game that can be played with just 2 players. It’s also a great game if you don’t have a lot of time as each round only lasts around 15 minutes.

You will have 25-word cards that are laid out into a 5×5 grid on the table between you. Next, there’s a key that you can see one side of each. This will have the grid, split into two, with 9 of the squares green (these are your agents) and 3 squares black (the assassins). There are a few more cards which are explained here. There’s also a timer for each round.

The rules are simple. You’re working together to find all of your agents and your partner has to guess the correct word. The only clue you can give them though is one word and a number. The number is how many other words there are related to the clue. Find all the agents and avoid the assassins and you’ve won the game! Hurray!

Forbidden Island is another game designed by Matt Leacock (the same designer as Pandemic) and it has a similar style too. The idea in this game is that you have gone to explore this forbidden island but it has been rigged to sink if anyone finds it. You must work with your partner to save the island before you all go under!

The playing cards are shuffled and laid out in a rough circle to start playing. This is cool because it means the board is different every time. Also, these cards have been praised by everyone for their beautiful screen-printed tiles. It’s these small touches that can really bring a board game to life.

You each choose one role; pilot, explorer, navigator, diver, messenger or engineer. This is another reason why this game can be played over and over again. It’s highly unlikely you’ll ever have the same board and the same roles twice. Once you’ve chosen your roles, you set the water level (higher if you want more of a challenge) and move around the board using action cards to try and save the island before you sink.

There are various challenges like water rising and sometimes you’re even forced to sacrifice part of the island to save the rest but you’ll work together to figure it out and win together (or lose together!) depending on how strategically you move around.

It’s been praised as another excellent 2-player game from Matt Leacock as it can be played over and over without getting repetitive. 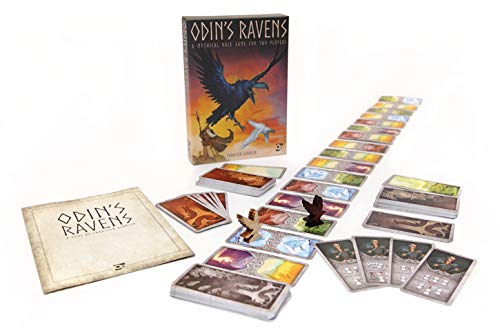 Alright, we’ve finally come to a competitive game and it is for 2-players only so the play is exactly the same. It’s a relatively simple game where the aim is to race across the “world” before your opponent. Odin sends two ravens across the world to retrieve information and get back to him. You’ll play as either Hugin or Munin.

The “world” is created by placing 16 land cards side by side. However, two of the same terrains cannot be touching so if they’re the same either rotate them or draw a new card. Each raven starts on separate sides of the card and has five play cards in their hand.

You use these to move along the land, matching up the terrain like dominos but be careful; your opponent could use one of their Loki cards to try and stop you from getting across. This game is partially luck because if you get a lot of the same terrain cards you can move along quickly but also it’s strategic because you have to choose when to use your Loki cards and try and hinder your opponent.

It’s explained in more detail by the Board Game Geek and Cardboard Clash offers a personal review on the game. Overall, this seems like a great fast-paced, easy to understand and easy to set-up game that can be enjoyed thoroughly by just 2 people! 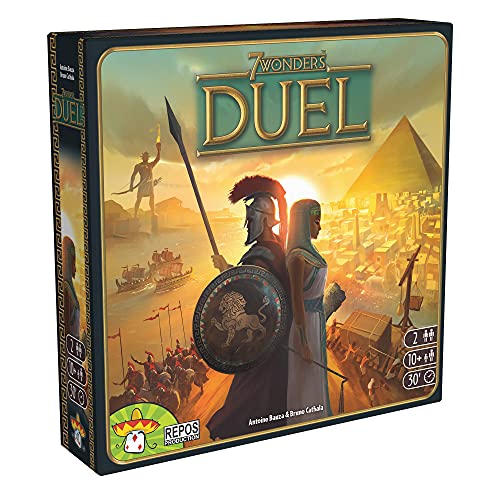 7 Wonders: Duel is a battle to create the 7 wonders of the world. You achieve this by collecting resource cards, advancing your military or your scientific prowess and you build your own civilization.

You don’t have your own hand of cards but you both choose from a display of covered and uncovered cards so timing is important. Some cards allow you to pick two cards up one after another but usually, you take it in turns. Each card you choose can be used to make a wonder, discarded for coins or built.

There are a few different ways to win this game. Either your military reaches the opponent’s capital, you collect 6 out of 7 science symbols or you win the most points at the end of the game. Board Game Geek explains in more detail the rules.

As agreed by The Spruce, this game is challenging, perfect for 2 people and it’s not as simple as having one way to win, various strategies can be used. Overall, an awesome 2-player game with a little bit of everything.

There we have it. We hope you’ve learned a little from this article about some of the incredible 2-player board games out there. Just because there’s only 2 of you doesn’t mean you can’t find a challenging and exciting game. Personally, I think the irony of playing Pandemic right now would sway me towards purchasing that one. Hey, you might even find us a way out of this mess!